The Inca Trail! Wow! I love to hike, but until this year my experience had been limited to one or two day hikes. Now, we were going to spend four days in the Andes of Peru hiking the trail to Machu Picchu. Most travelers choose to take the three-hour scenic train ride from Cuzco, but we decided to hike the route taken by the ancient Incas—a trail considered to be one of the most scenic in the world. All the literature said that any “reasonably fit” person could do this, but since they also mentioned passes with elevations of up to 14,000 feet, I was a bit apprehensive.

The popular trail now known as The Inca Trail was most likely the “royal” road between Cuzco and Machu Picchu, used mostly by royalty and pilgrims to the sacred city. The trail was a road of its time—built for men on foot, and lightly packed llamas. It is paved with interlocking stones and traverses the mountains and passes with thousands of steps.

The California Native provided us with porters—native farmers who carry all the gear and food—leaving us to carry only a daypack. For the two of us there were six porters, a guide and a cook.

The porters travel ahead of the hikers, carrying up to 50 pounds on their backs. Each time we stopped for lunch or for the night, they were already at the site, the tents were up, and our cook was preparing us a sumptuous meal. 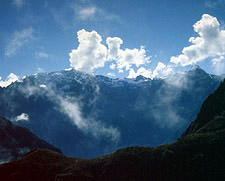 On our first day, before beginning our hike, we stopped at a colorful outdoor market where our cook bought fresh food supplies. Then, crossing a footbridge over the Urubamba River, we began our trek. After a few hours of easy hiking we stopped for lunch. Much to our surprise, in a restful grassy meadow, there was a dining tent, complete with table and chairs, warm water to wash in, and a hot meal. That afternoon we continued on and were treated to views of snow-capped mountains, llamas grazing in the fields, flowers, meadows and lakes.

Along the way we met all kinds of people, including a 71-year-old retired Australian woman traveling on her own (with a guide and porters), huffing and puffing up the stone steps. The very popular trail hosts many hikers, but never really seems crowded.

On day two we triumphantly crossed the highest pass, known as “Dead Woman Pass,” just under 14,000 feet, through a light drizzle, then began the steep descent, with spectacular views on the way down. As we arrived at the campsite, we heard the other hikers applauding our Australian friend, as she too arrived, having conquered the hardest part of the trail.

Day three included two more passes, visits to several Inca ruins along the trail, and a walk through a beautiful “cloud forest,” filled with lush tropical plants and colorful flowers. If day two was the most difficult, day three was the loveliest. As we crossed the final pass, the Urubamba Valley and the mountain of Machu Picchu lay before us. We walked down the steps through the terraces of Intipata (cloud-level town) to our final campsite at Winay Wayna.

The next morning we rose before dawn, to arrive at the Intipunku (Gate of the Sun) in time to watch the sun rise over the “Lost City.” As the sun came over the mountain the ruins slowly emerged from dark shadows turning a glorious golden color.

We toured Machu Picchu, then took the bus to Aguas Calientes, a small town noted for its relaxing mineral baths. After a much-needed shower and a short rest, we strolled down the main street, and as we approached a small café, there was our Australian friend, sipping a beer and beaming, “I made it, and I’m still alive!“ Then she raised her beer in a toast to one of the greatest experiences of her life.

One Reply to “The Inca Trail to Machu Picchu”