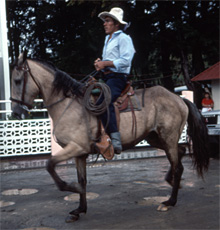 What in the world is a Tico? Sounds exotic. Maybe it’s something like a Piña Colada or a Cappuccino. Or maybe it’s one of those little biting pests that you find in tropical places. Wrong! A Tico is a very special group of people that inhabit one of the most beautiful, tropical and hidden paradises in the world—Costa Rica. “Tico” is simply the name commonly used to refer to the native inhabitants of Costa Rica.

But why “Tico“? In the Spanish world, the diminutive, formed by dropping the final “o” or “a” and adding an “ito” or “ita” depending on the gender, is commonly used out of friendliness and familiarity. It’s much more cariñoso (affectionate) to call your amigo (friend) an amigito (little friend).

About a century ago many Costa Ricans made the mistake of forming the diminutive by adding an “ico” to the end of words. So poquito (the Spanish diminutive of the word poco, little, few) would be poquiTICO when spoken by a Costa Rican. Because of their friendly and warm-hearted manner, the people of Costa Rica commonly used the diminutive in their everyday speech patterns and thus earned the nickname “Ticos” from outsiders.

Although the Costa Rican educational system has now taught most of the Ticos the correct grammatical usage of the diminutive forms in Spanish, the term “Tico” remains to commemorate this charming affection of the past.