Glistening orchids cling to the towering trees surrounding us in the swirling mist of the Costa Rican cloud forest. More than 1,200 species of these beautiful blooms can be found in this enticing little country which has made the orchid its national flower. 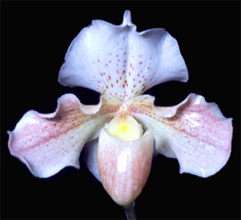 According to legend, orchids were given their name by the Greek philosopher Theophrastus, who was a student of Aristotle. The rounded paired bulbs of one common Mediterranean orchid looked like male organs to him so he named the plant orchis, the Greek word for testicle. In medieval Europe, aphrodisiacal powers were attributed to the plants and their dried pulverized tubers were used in love potions. Potions made from younger, firmer tubers were believed to result in the conception of sons, while potions made from older, softer tubers resulted in daughters.

Orchids cover a full spectrum of colors and patterns, from delicate pastels to vibrant full-bodied hues, and range in size from tiny plants an inch high with flowers so small that we can barely see them, to 50 foot long vines with blossoms spanning more than a foot—some bloom only for a day while the blossoms of others last for weeks.

But what actually is an orchid and why do people find them so fascinating? We looked into the nature and history of these exotic plants and came up with some fascinating facts.

Orchids are the largest family of flowering plants (almost 30,000 wild species have been classified) and also the most diverse. Although they can be found in a wide range of habitats—one is semiaquatic and only its blossoms poke above the water surface, while another grows and blooms entirely below the ground—the greatest diversity of orchids can be found in tropical cloud forests. Most of these tropical orchids are epiphytes—air plants, which grow on the trunks and limbs of trees. Although they grow on the trees, they are not parasites and only use the tree as a place to anchor where they can receive light high above the forest floor—biologists have recorded almost fifty different orchid species growing on a single tree.

An orchid seed has no food source of its own, but each species has a symbiotic relationship with one particular fungus—without that fungus the seed cannot grow.

Just as the colors and sizes of orchids have so much variety, their scents also cover a wide range—some have no scent at all, others give off musky decaying smells, and one has the delightful scent of vanilla—in fact, it is vanilla. The vanilla plant is the only fruit produced by the orchid family that humans can eat. Centuries ago, the ancient Aztecs used vanilla to flavor their chocolate drinks. When the Spanish conquistador Hernando Cortez was offered the drink by the Emperor Montezuma, he was so impressed that he brought it back to the King of Spain and it soon became a favorite with the royalty of Europe.