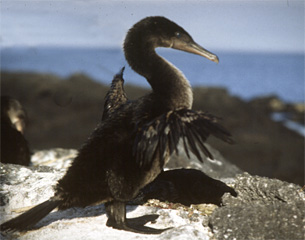 “Get out there and loot!” she seemed to squawk as she roughly shoved her mate out of the nest. He looked about, spotted a nest whose residents had temporarily left unattended, snatched some nesting material from it, and hurried back to his sweetie who nuzzled him appreciatively before sending him out again on another pillaging mission.

Cameras clicking away, we watched this domestic scene of Flightless Cormorants, only a few feet away from us.

Flightless Cormorants are found only on the Galapagos islands of Isabela and Fernandina. They are the largest of the cormorant species and the only ones who can’t fly. Since they have no natural predators in the Galapagos, and their food source (fish, squid octopus, eel, etc.) is easily accessible, these birds had no need to fly, and instead evolved powerful legs and short stubby wings. Since they do not produce a lot of oil, their feathers become waterlogged and so once back on land they pose with their wings spread to dry.

Their courtship “dance” is a sight to behold. The male and female circle each other in the water, eventually interlocking their long necks and making a grunting noise (the only sound these birds make). Then the female follows the male to shore, where they build their untidy nest, the male bringing items to the female to add to the nest. Eventually, three white eggs are laid, and both share the responsibility of incubating them, taking turns getting food and staying on the nest. After the chicks have hatched (and often only one survives), they continue to share the responsibilities of food and protection. Once the chicks can feed themselves, the fickle female leaves in search of a new mate, sometimes breeding three times in one year—the little tart!

In recent years, domestic animals and man have reduced the population to the point where fewer than 1000 pairs remain. They are considered endangered and efforts are being made to keep the current population of birds from decreasing further. Only in the Galapagos, with its protected environment, do we have the opportunity to watch these birds, as well as the other unique species, go about their daily routines, completely unthreatened by our presence.