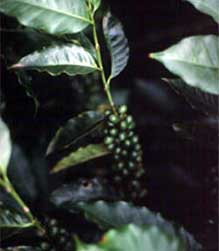 According to Greek mythology, coffee originated when Zeus’ daughter, Helena, prepared a drink that “had the power of robbing grief and anger of their sting and banishing all painful memories.”

Throughout history, religious leaders preached that the drinking of coffee was dangerous and the “drink of the devil,” but in the 17th Century, the Pope gave his blessing on the consumption of coffee, and in Turkey, as part of the marriage vow, the husband had to provide (till death do they part) his wife with coffee—failure to do so was grounds for divorce.

Coffee arrived in Costa Rica in the 1790’s, and one could describe the relationship between Costa Rica and coffee as a love story—they were made for each other—the rich soil, ideal climate and altitudes were perfect for growing the red berries. Costa Rica exported its first coffee to Columbia in 1820, and twenty-three years later, London became a profitable market for the rich beans, converted in the mills to “grains of gold.”

After a brief civil war in 1823, free land grants, coffee plants and small parcels of land were given to families that wanted to grow coffee. Thus, Costa Rica is said to be based on a “Coffee Democracy.”

Coffee was originally hauled from the Central Valley to the coast on the backs of mules, but by the mid-1800’s, roads were developed and oxcarts replaced the mules. Even today some farmers rely on this traditional method of transporting their goods.

The coffee industry plays such a prominent role in the existence of this nation, that there is a special branch of the government that deals solely with coffee—The Costa Rican Coffee Institute or Instituto del Café. León Cortés Castro was the institute’s first president, and in 1936, went on to become president of the country.

Today, there are approximately 50,000 coffee producers in Costa Rica and together they produce more than 170 million tons of coffee. Costa Rica’s fine, high quality coffee is known throughout the world, and is frequently used to upgrade lesser quality coffees, like those of Brazil.

Modern medicine is still undecided on the health effects of this caffeine beverage but one thing is for sure, Costa Rica has found it quite stimulating.

So join us for a cup—in Costa Rica!