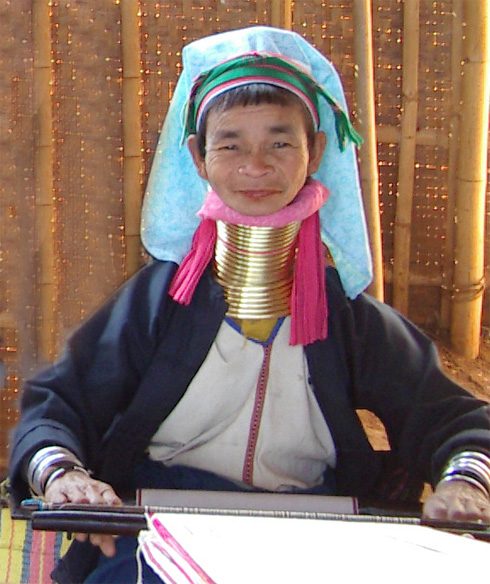 In Myanmar (Burma), one group of indigenous people that really stands out are the Padaung women of the Karen people, sometimes known as “long-neck” tribe.

At first glance, it looks as if the women are wearing gold rings to elongate their necks, but actually, this is not physically possible. The long neck is really a visual illusion. The women wear metal rings, whose weight pushes down their collarbones and upper ribs to such an angle that the collarbone actually appears to be a part of the neck, giving the illusion of an unnaturally long neck.

The most common explanation for this practice is that the look of an extra-long neck is a sign of great beauty and wealth, which will help attract a good husband. Some also say the opposite; that it is done to make the women unattractive so they are less likely to be captured by slave traders. Padaung mythology says the reason for the neck rings is to prevent tigers from biting them. It is also said that adultery is punished by removal of the rings. If the rings are removed after years of wearing them, the woman must spend the rest of her life lying down since the neck muscles will have been severely weakened by years of lack of support for the neck. Luckily, the instances of divorce and adultery in the Karen tribe are very low.