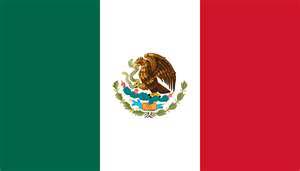 On February 24, Mexico celebrates Dia de la Bandera, or Flag Day, a civic holiday with parades and festivities to honor the Mexican Flag. On that date in 1821, the Plan de Iguala, which proclaimed Mexico as an independent country, was signed.

The green, white and red flag was adopted at that time and although it has undergone some revisions since, the basic design has remained. Its stripes are green for hope and victory (or Independence), white is for the purity of ideals (or Roman Catholicism), and red for the blood of national heroes (or for the Union).

In the center of the flag is the National Coat of Arms which features an eagle with a snake in it’s claws. According to legend, the Aztecs, who were the original inhabitants of Mexico, were told by their gods to find an eagle perched on a prickly pear cactus and holding a snake. At this location they would build their permanent city. The story goes that they saw this eagle on an island in the middle of a lake, and built their city, now known as México City, around the island.

Throughout all of Mexico, you will see that the most respected symbol among the Mexican people, is their national flag. ¡Viva México!